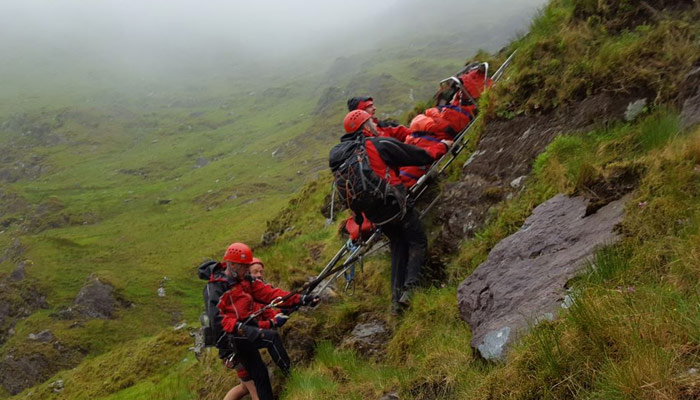 On Saturday afternoon at 1.00pm, 25 members of Kerry Mountain Rescue team were called to the assistance of a walker on the Macgillycuddy’s Reeks. The walker, a woman in her twenties, had sustained a lower leg injury while ascending Carrauntoohil. First aid was administered to the injured walker by Team members. KMRT evacuated the casualty by stretcher down the Devils Ladder and into the Hag’s Glen. She was met by the Irish Coast Guard Helicopter, Rescue 115 and transported to Tralee General Hospital. The Team returned to base at 6.00pm.

Later on Saturday evening there was a second call for assistance at 7.00pm. While descending Mangerton mountain in heavy mist, two walkers, a male and female had become separated and one was missing. The Team were tasked to locate the missing woman. After a short search the lady was located in the Torc area safe and well. The team retuned to base at 9.00pm.