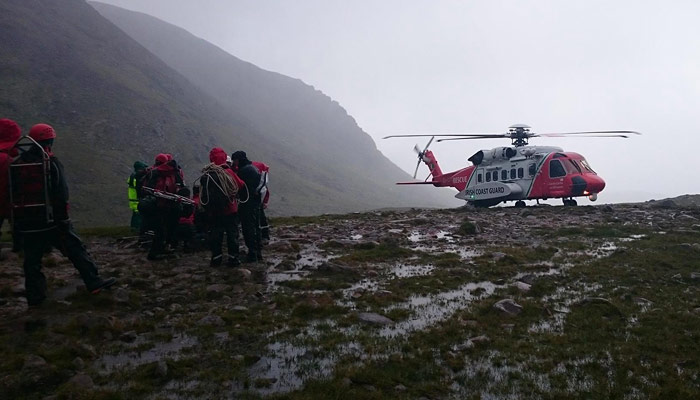 Kerry Mountain Rescue Team were called to the rescue of a hillwalker on the upper northern slopes of Cnoc na Toinne, above the Hag’s Glen in the McGillycuddy’s Reeks on the morning of Sunday 10th July last. The walker, an Irishman in his mid-50’s, sustained serious injuries in a fall from a descent route known as the Zig-Zags (Bothar na Gíge). Conditions on the mountain were poor with heavy rain and strong winds throughout the day.

KMRT treated the man for his injuries at the scene, and lowered him by stretcher to Ard na Locha where he was transferred to Tralee General Hospital by Rescue 115 Coastguard helicopter for further medical treatment.

The callout concluded at approximately 16.30. A total of 15 KMRT personnel were involved in the rescue effort. This is the third serious incident on the Zig-Zags in the last couple of months.